Catholics for Catholics mourns the passing of Pope Benedict XVI, the greatest theologian of modern time 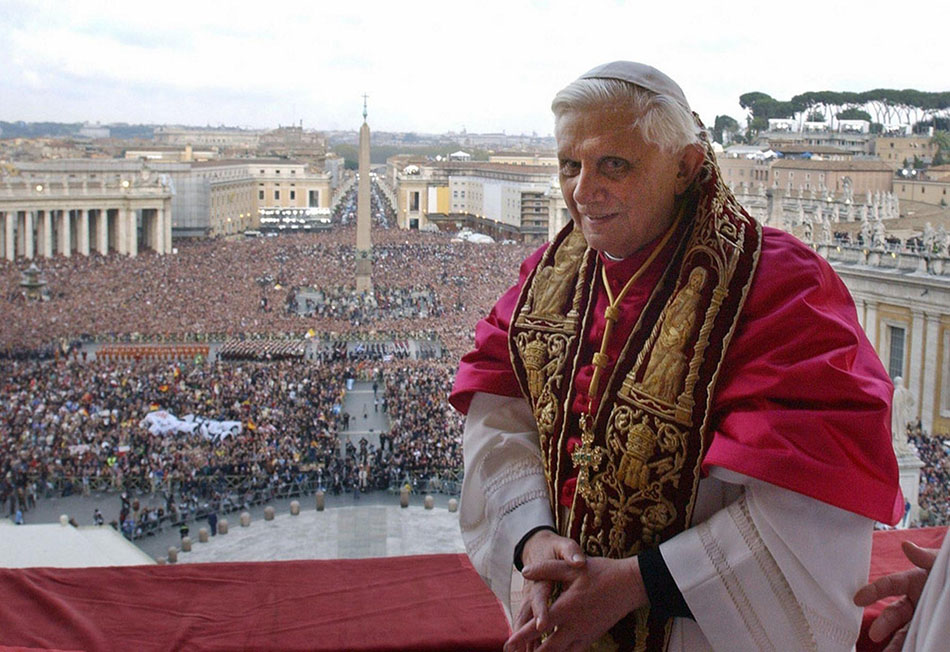 Cardinal Joseph Ratzinger is named as the New Pope, Benedict XVI, after just 24 hours of the Cardinals Conclave at St. Peter’s Basilica in the Vatican City, April 19, 2005 (Image: Getty)

Catholics for Catholics is deeply saddened by the passing of Pope Benedict. His life of service and writings will long remain a light for the Church and world. This includes the pope’s last spiritual testament in defense of faith and reason:

“I say now to all those in the church who have been entrusted to my service: stand firm in the faith! Do not let yourselves be confused! It often seems that the science—the natural sciences on the one hand and historical research (especially exegesis of Sacred Scripture) on the other—are able to offer irrefutable results contrary to the Catholic faith,” he wrote. “I have experienced the transformations of the natural sciences since ancient times and have been able to witnessed how, on the contrary, apparent certainties against the faith have vanished, proving to be not science, but philosophical interpretations only apparently pertaining to science; just as, on the other hand, it is in dialogue with the natural sciences that even faith has learned to understand better the limit of the scope of its claims, and thus its specificity. It is now 60 years that I have been accompanying the path of Theology, particularly of Biblical Sciences, and with the succession of different generations I have seen theses that seemed unshakable collapse, proving to be mere assumptions: the liberal generation (Harnack, Jülicher, etc.), the existentialist generation (Bultmann etc.), the Marxist generation. I have seen and I see how from the tangle of assumptions emerged and emerges again the reasonableness of faith. Jesus Christ is truly the way, the truth and the life—and the Church, with all its insufficiencies, is truly His body.”

Executive Director for Catholics for Catholics, John Yep, recounted his meetings with Pope Benedict, “I was blessed with the great fortune of meeting His Holiness Pope Benedict on multiple occasions while living in Rome. The memory of his helicopter lifting off and away from the Vatican in February 2013 signaling the end of his papacy is forever etched in my mind,” said Yep. “Pope Benedict was relentless in his teachings of the faith handed to us by the Apostles.

One of many examples of the pope’s faith-driven vigor was witnessed during the 2004 U.S. presidential elections. The U.S. Bishops inquired of Rome as to handling Catholic politicians who presented themselves for Holy Communion, yet actively promoted abortion. Pope Benedict remained resolute in the church’s position to decline the cohort Catholics Holy Communion.

“Regarding the grave sin of abortion or euthanasia,” Pope Benedict wrote, “when a person’s formal cooperation becomes manifest (understood, in the case of a Catholic politician, as his consistently campaigning and voting for permissive abortion and euthanasia laws), his pastor should meet with him, instructing him about the Church’s teaching, informing him that he is not to present himself for Holy Communion until he brings to an end the objective situation of sin, and warning him that he will otherwise be denied the Eucharist. When these precautionary measures have not had their effect or in which they were not possible, and the person in question, with obstinate persistence, still presents himself to receive the Holy Eucharist, the minister of Holy Communion must refuse to distribute it,”

These words came from the heart of a father who wished to call these gravely mistaken politicians back to the fold and to protect them from further sin. In a world where relativism had run rampant, Pope Benedict truly was the rock on which Christ was able to build his Church. This spirit is what drives our own mission at Catholics for Catholics.

“Pope Benedict was a fighter for all human values, especially for the right to life of every child,” said General Michael Flynn, Catholics for Catholics senior advisor. “His devotion and love of freedom for all of mankind threatened those of the soulless New World Order. His passing should be a wakeup call for all people of faith. We must never take our faith in God for granted—it comes at great sacrifice. It is his lifetime of service and sacrifice to God that is Benedict’s greatest legacy. May he rest in peace with the Lord.”

In the early morning hours of December 31, 2022, Pope Benedict set off on another departure from the Vatican. Unlike that of 2013 when he became the first pope to resign in 600 years, this journey would take him to his Final Judgement.

We join in prayer with millions of people around the world to beg for God’s mercy upon his soul so that he, like all of us, may one day enter the Gates of Heaven the goal of our lives on earth.